One month of babyhood to go until Ace is officially a big boy, or at the very least a toddler. Let’s dive right in!

We have no clue what Ace’s stats are. We were far too busy this month having fun, and the prospect of putting a squirming almost toddler on an infant scale sends shivers up my spine. Guess it is time to retire the infant scale to basement with the rest of the baby gear. To me Ace seems to be getting heavier and taller, but that could just be my achy back talking from hauling him around.

Ace now has a full head of hair as opposed to just the fuzzy stuff he was sporting for about the first 9 months of his life. Also, Ace got three new teeth this month. He has a grand total of four on top and three on the bottom. His teeth are so round and spaced out that his mouth looks a bit like Sloth from The Goonies. Perhaps he needs a flipper ;).

Ace is walking, but is still pretty unpredictable on his feet. I may have jumped the gun on announcing “he’s walking” on Facebook as I did a couple of weeks ago (whoops). I am not sure if it is this way with all new walkers, but Ace has great days walking and days of regression where he seems to have lost a bit of his confidence. For the most part he walks around the house staying close to walls and furniture. He gets more confident during storytimes and when he is around other babies/toddlers.

It is exhausting having a mobile child! All he wants to do is go, go, go. By the time 6:30 rolls around (when we put Ace to bed), I am barely able to do more than eat dinner and zonk out in bed for the rest of the evening. It is no wonder that I can’t stay awake past 10:00 anymore.

Ace has added two new words to his repertoire this month. Banana and Mama. He actually says “nana” for banana, but we will take it. That brings him up to four words: kitty cat, dada, mama, and nana.

Everyday, Ace is showing more and more personality. He is still indicating his preferences (mostly by crying), but is also figuring out ways of communication with us without words. For example, he has started to give real hugs and kisses which is very sweet. He also will pull at you to indicate the direction he wants to go when he is walking.

As for play, Ace loves reading and playing with balls. You can give him a book anytime you need a minute and he will page through it dutifully. So far, he “reads” on the changing table, in his car seat, in his high chair, and anytime he is plopped down on the floor. Can you tell he is the son of a teacher and the grandson of two teachers?

Ace has been doing great eating most solids. He still loves to chuck food off of the side of his high chair, but I just take that as him communicating that he is done :).

I wanted to talk about weaning a bit this month, so feel free to skip these next few paragraphs if you are just here for the baby pictures (ahem, Dad). I think I mentioned before how over breastfeeding I was and my desire to wean Ace as soon as possible (with his pediatrician’s blessing) from breast milk to cow’s milk. I had to actually look up weaning on the internetz, because I was having trouble picturing how I would simply quit nursing him and start giving him cow’s milk. I guess weaning is as simple as dropping one feeding at a time. So far this month we have gone from four nursing sessions to two. Before both of his naps we read a couple of books and I offer him some cow’s milk in his sippy cup instead of the breast. I lay him down in his crib awake and 95% of the time he falls asleep. I stopped the morning session the first week and the afternoon session the second week. Easy peasy, right?

The problem now is figuring out how to drop the first thing in the morning and the good night nursing sessions. I should also add that Ace seems less than enthused with cow’s milk. He takes once sip before pushing the cup away. In the morning, Ace seems FAMISHED and can’t get milk in to his belly fast enough. Maybe I should just have a sippy cup of cow’s milk ready in the fridge in the morning, and pray that he is so hungry he doesn’t notice it is something he hates?

The last nursing session of the day is an even bigger problem. It is the one time of the day that he reaches out, cries for me and DEMANDS milk. Perhaps this is a sign that he is not ready to be weaned and I should take in to count his desires in assessing when to wean? I suppose I already know the answer to this one, I just don’t want to admit that weaning might not be happening this month.

Sleeping was great this month. Both of his naps have gotten a bit shorter, but Ace is sleeping through the night so who cares?!

On to the rest of the cute baby pictures this month: 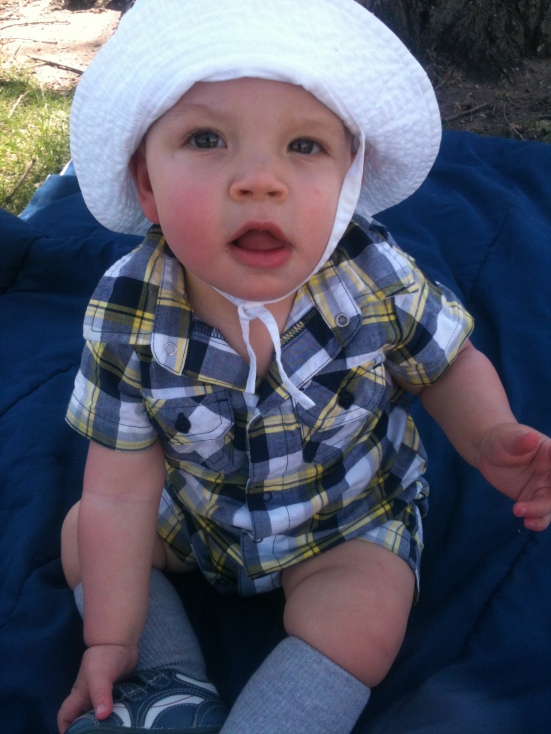 Liberty, Happiness and those who get in between the two

Musings of a history nerd